Bollywood Actress never fails to attract the attention of the media and their audience. Be it a relationship or their outfit, everything seems to be perfect on the screen and as a matter of fact, Yoga Pants had always been hot. Some of the Bollywood actresses have been in public with their yoga pants and sports outfit and well they were able to get enough attention. Be it a publicity stunt or a mean to gain attention, they didn’t fail. Here we compiled a list of 15 Indian Actresses in Hot Yoga Pants Looks.

Let us have a look at them and be careful, the content ahead is sizzling hot.

The list begins with Shraddha Kapoor and she is often spotted in a V Neck Tank Top along with tight Yoga Pants. She looks great during the workout session and she is surely working hard to get that perfect figure to impress her fans in Bollywood. 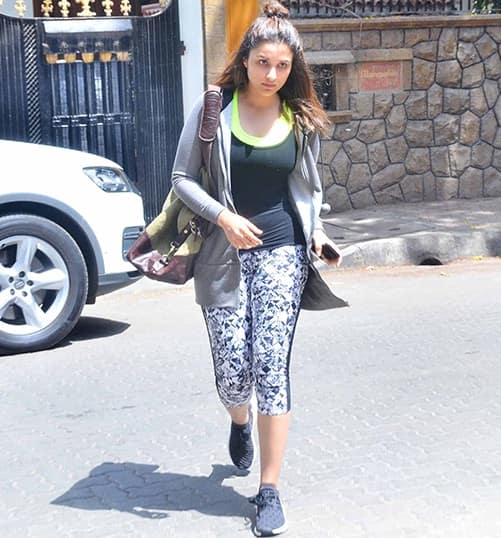 Next on our list is Parineeti Chopra and the actress had always been involved with fitness activities. At one point in time, she was a little overweight and she went a long way to lose the extra kilos. She is also known for her great dressing sense. Often she even goes to the market in the yoga pants and all her outfits’ suits her a lot.

Sonakshi Sinha is another beautiful actress on our list and she is also known to be a trendsetter in Bollywood. She gained a lot of fame while working with Salman Khan and today she is spotted in various sports outfit. It seems like her favorite pair of clothes includes a neon top and a yoga pant along with sports shoes. She is often spotted in open air spots like a park with the outfit. 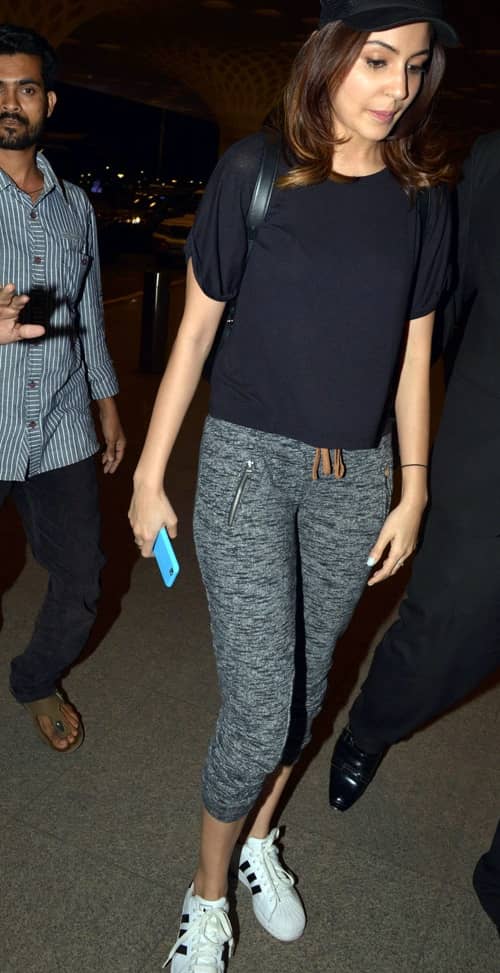 Well, who doesn’t know Anushka Sharma? She is Virat Kohli’s girlfriend and she is also a fitness freak. She is often sported in sports outfit during the workout sessions and she always gained the attention of her fans because of her simple yet sexy clothes. We also found some of her pictures in capris and sports shoes while she is working out with her trainer. 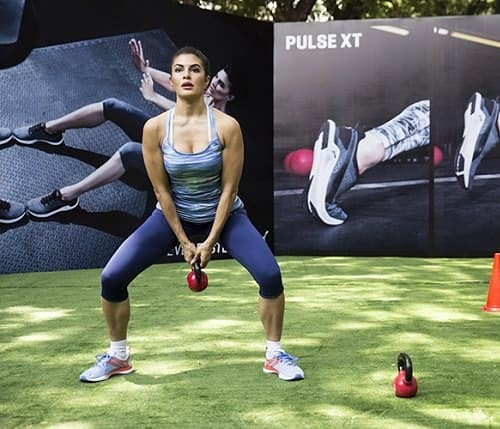 Next on our list is Jacqueline Fernandez and she gained a lot of attention of her fans because of her outfits. It seems like she is loyal to Puma as she is often spotted in Puma’s outfit. In addition to this, her flexibility adds on to her boldness and beauty.

Katrina Kaif doesn’t need any introduction either. She has delivered many super hit films on box office and she is also a fitness freak. She hits the gym regularly to maintain her figure and that makes it easy for her to be in limelight. All the colors suit her and she looks sizzling hot in a pair of Yoga Pans and T-Shirt.

Nargis Fakhri is on number 9 in our list and she is often seen during the workout sessions in a sports bra. The sports bra helps her in maintaining her composure and in addition to this, she is in love with the colorful yoga pants. The outfit makes her look awesome and it makes it difficult for her fans to take their eyes off her figure. 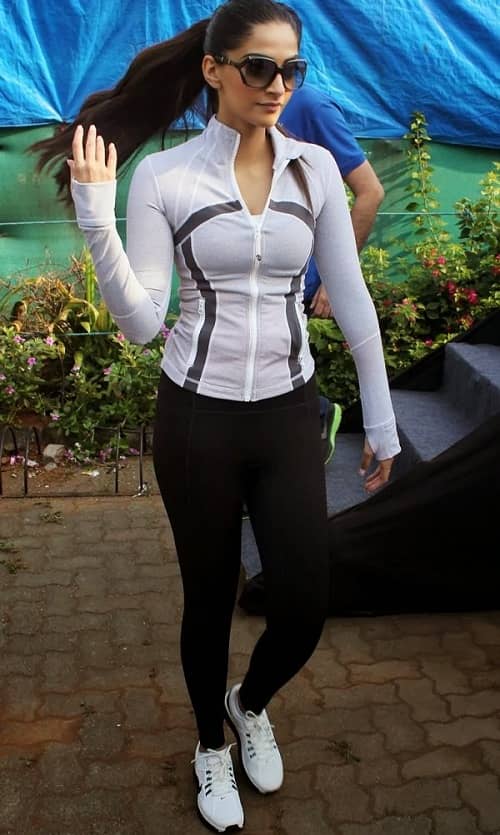 Sonam Kapoor is another popular face in Bollywood and she is a fitness freak. She often pairs up her tank top with a jacket and a yoga pant for her workout. Her hair also looks perfect and she makes a pony for intense workout sessions. She looks really confident in her sports outfit and that is the key to success.

Kangana Ranaut is one such actress who really had to work hard to achieve success. It is also important for her to maintain a perfect figure so as to stay in the competitive industry and to follow a fitness regime, it is important to have a comfortable dress. She is mostly dependent on her yoga pant for her clothing during the workout. 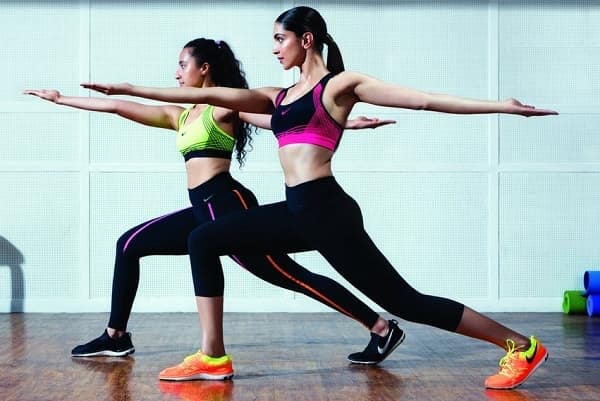 The list can’t be complete without Deepika Padukone and she is on the 6th rank in our list. She is tall and she is slim. She is mostly spotted in Nike Sports Bra along with Yoga Pants or tights which attracts a lot of attention of her fans.

Kareena and her son had been in news for quite some time. Tahir is quite like his mother. His mother is not just cute but she is also sexy. What adds to her hotness is her outfit. She believes in simplicity and that is what helps her in standing out of the crowd. During the workout sessions, she is seen is a t-shirt along with sports shoes and yoga pants. 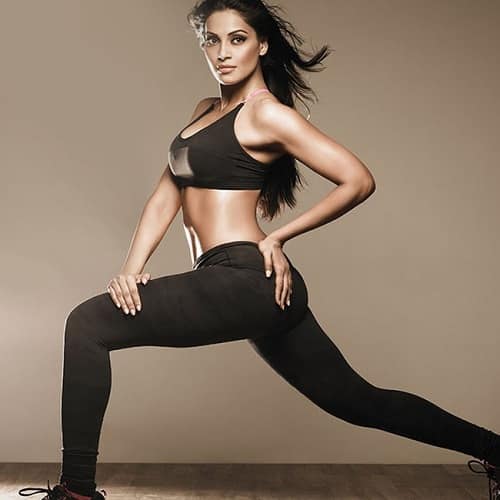 The list can’t be complete without Bipasha Basu’s presence. It is a well-known fact that she is too much into Yoga and Yoga keeps her fit and hence it is not difficult to find her in Yoga Pants. She often wears a sleeveless jacket along with a tank top during her Yoga sessions and well she is the role model for many girls.

Alia Bhatt is the cutest actress in our list. She gained a lot of fame because of the way she interacts with the people and she had always been a butt of the joke in many shoes. During the workout, she prefers yoga pants as they make her comfortable.

Priyanka Chopra is not just an Indian star but she is an international star who had been featured in movies like Baywatch. She is known for her sense of style and she never fails to make a style statement. She is often spotted in a sports Bra, T-shirt, and a Yoga Pant during her fitness regime. 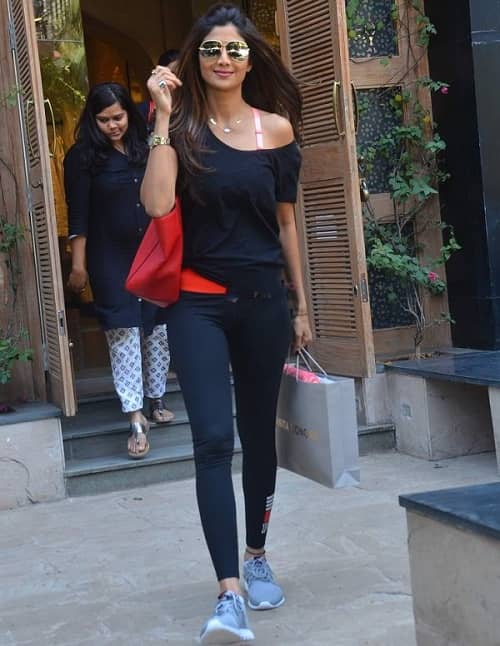 Shilpa Shetty had also been involved with Yoga and she in on top of our list because of her perfect figure. All credit of this perfect figure goes to Yoga and here is one of her hot pic in a simple T-shirt along with Yoga Pant and Sports Shoes. She is surely one of the hottest ladies in the industry.

These were the top 15 Indian Actress in Hot Yoga Pants looks and we are sure that you are in love with them by now. Stay tuned and we will be back with more such sizzling news for you.