Sunny Deol is one of the most famous action stars of the Indian film industry and the son of the original He Man, Dharmendra. Sunny has carried ahead the legacy of his father by giving some of the best action flicks in the industry during a glorious career which has spanned over two decades. 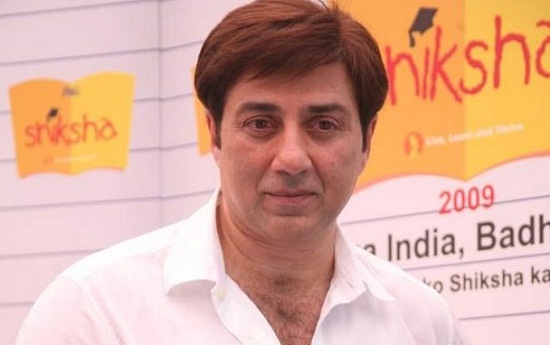 Income Sources: Sunny Deol is one of the highest paid actors in the industry, who makes as much as Rs 7-8 crores. He also owns a production house and makes money from brand endorsements. One of his most well known modeling assignments is for Lux undergarments, which carries the tagline of “Yeh Andar Ki Baat Hai”.

Sunny Deol was born as Ajay Singh Deol in a Sikh family from the Sahnewal village of Punjab. His father is a well known actor of the yesteryears. He has a younger brother, Bobby Deol, who is also a Bollywood actor. He has two sisters, Ajeeta and Vijayta and tow step sisters, Esha and Ahana Deol, from his step mother, Hema Malini.

Sunny made his Bollywood debut in 1984 with the romantic film called “Betaab”, in which he was paired with debutante Amrita Singh. The film turned out to be a huge blockbuster and became a perfect launch pad for his successful career in the industry. His action film called “Arjun”, which released in 1985, established Sunny as the latest action sensation in the industry at that time. Next came, some hit films like “Sultanat”, “Dacait”, “Chaalbaz” and “Yateem”. The landmark of his career came with “Ghayal”, a film which won seven Filmfare Awards. The movie was made under his home banner Vijayta Films and also fetched him his first National Award. Another film called “Damini” got great accolades for Sunny as an actor, for his brilliant performance in the role of a young lawyer, fighting a case in favor of the witness of a rape case, portrayed by actress Meenakshi Sheshadri. This film is no less than a milestone for the Indian film industry. From the eighties and the nineties, Sunny carried his magic in the next decade with an unforgettable performance in the patriotic film called “Gadar-Ek Prem Katha”. Subsequently, his hit spree continued with films like “Apne”, “The Hero: Love Story of a Spy” and “Yamla Pagla Deewana”. His son, Karan is expected to carry forward his legacy and will be making his Bollywood debut soon.

Sunny Deol is born with a silver spoon in his mouth and owns a large number of ancestral properties in Punjab. He also has a plush bungalow in Mumbai, in addition to more properties in the city. He also has a house in UK, which he uses for shooting purposes. Sunny is fond of luxurious car and is seen driving an Audi when he is in Mumbai and a Porsche during his UK trips.