Is Bangladesh part of Asia, the Middle East, or Africa?

A lot of people, especially those who did not take their geography classes seriously, will probably scratch their heads when asked about the exact location of Bangladesh. On the other hand, those who know something about this country will most likely have in their minds images of Bangladesh that are either partly true or completely false.

Today, 10 things about Bangladesh today are enumerated. How many of the following do you already know? 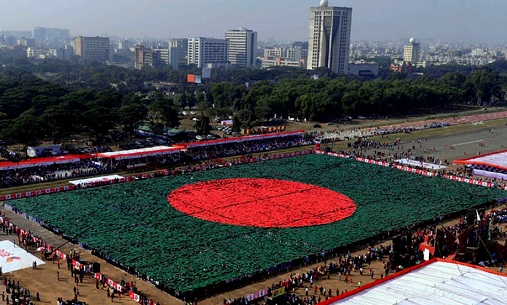 In the early part of the twentieth century, the Indian nation was actually made up of three states – India, which is where most of the Hindus lived, Pakistan and East Pakistan – which are both predominantly Muslim. Due to religious differences, India and Pakistan split to form two different nations and after close to twenty years – so did Pakistan which officially changed its name to Bangladesh.

This nation, tucked at the tip of the Bay of Bengal, is the world’s 8th most populous nation. With a land area of close to 148,000 square kilometers, Bangladesh is also one of the world’s most densely populated nations. Approximately 1,035 people share 1 kilometer of land. This population density gives rise to many problems brought about by overpopulation.

8. Bangladesh is now one of the world’s fastest developing countries.

Though still faced with severe problems such as political instability, climate change, religious extremism, and poverty, the Bangladeshi economy has grown in leaps and bounds since 1975. Poverty incidence has been halved and very recently, Bangladesh has already surpassed both India and Pakistan in life expectancy and human development.

7. Bangladesh is the site of the most severe flooding in world history.

In September 1998, torrential monsoon rains caused the Brahmaputra, Ganges, and Megha rivers to overflow, thus causing severe flooding that swallowed up to 300,000 houses, 10,000 kilometers of road, 30 million houses, and killing 135,000 cattle and over 1,000 people. This flood submerged 65%of Bangladesh’ total land area under water. In fact, Bangladesh is one of the countries most endangered by the effects of climate change.

6. Bangladesh has one of the highest levels of deforestation and animal extinction all over the world.

The large population of Bangladesh has made it very competitive for its people to acquire much needed resources for food and livelihood. The severe competition for resources has hastened deforestation and the clearing of land for human settlement. Thus, many animals that used to be endemic only to Bangladesh are no longer found there nor anywhere else in the world.

5. Bangladesh is perceived to be one of the world’s most corrupt nations.

One of the factors that still hamper sustainable economic development in Bangladesh is the perceived lack of transparency in national government. A number of Bangladeshi politicians have been involved in high profile corruption cases and foreign investors have repeatedly narrated their hardships in dealing with the government, as red tape is highly rampant.

4. Every 1 in 4 Bangladeshis live below the poverty line.

Down from 57% a few decades back, Bangladesh continues to struggle with poverty, as 25%, or 42.5 million of its population continue to live with less than $1.25 a day – the global poverty threshold. It is expected though that continued social reforms will further decrease this number.

3. Bangladesh is home to the largest population of children suffering from malnutrition.

As population growth continues to grow at an exponential rate, many Bangladeshi children continue to suffer from malnutrition and lack of decent health care. The government aims to resolve this by encouraging couples to delay having additional children until such time that the couple has reached economic viability to have more children.

2. Bangladesh is home to some of the world’s greatest thinkers.

The European sport cricket has taken South Asia by storm – due largely to their former British colonizers. Bangladesh has a very prominent cricket team – and the sport’s popularity has permeated Bangladeshis coming from all walks of life.